One of the most fascinating hobbies that not many people participate in, is amateur astronomy. When people think of astronomy, they think about large observatories, but little do they know that you can watch the stars from the comfort of your own attic, or patio. Contrary to popular belief, telescopes aren’t all that expensive (at least the ones meant for beginners and amateur astronomers), and almost anyone can afford them.

However, it’s true that there are thousands of different models and picking the right telescope may be difficult for someone who doesn’t know what to look for. There are three basic types of telescopes – refracting, reflecting and catadioptric. 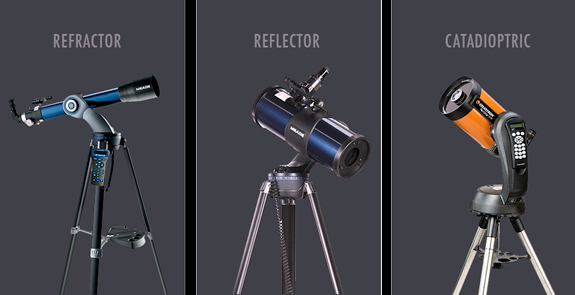 This model features a convex objective lens and it is the type that instantly pops up in people’s mind when they think of a telescope. It’s the type of telescope Galileo used to discover Jupiter’s moons and Saturn’s rings in the 17th century. These telescopes have a higher image contrast than other types, but the high-end models are quite expensive.

These models don’t have an objective lens, and instead feature a concave mirror. They work by sending a cone of light through the tube, where a flat mirror intercepts it and sends it to the side of the tube, where the eyepiece is located. These models are much cheaper than refracting models, which is why they’re the most popular option for amateur astronomers.

This is a special type of reflecting telescopes that has a correcting lens which forms the image. These telescopes are easy to manufacture and are very compact, which makes them ideal for amateur astronomers who want to set them up in remote areas and explore the sky.

Regardless of which type you end up choosing, always look for quality over power. This is one of the most common mistakes that amateur astronomers make when purchasing telescopes. Any model will give you high magnification, but not only does that increase the size of the image, but it also greatly improves the effects when looking at objects through our turbulent atmosphere. This will result in a fuzzy and enlarged image that will be impossible to keep in the telescope’s field of view.

For beginners, 2.4 or 3 inch refractor, or 4 or 6 inch reflector models are great. These models are more portable and they cost a lot less. They’re great for spotting Saturn’s rings, exploring the moon, getting a glimpse of Jupiter’s clouds and Mars’ surface.