The youngest sleep apnea patient is a 6-year old kid with dark circles under eyes and a chronic congestion. The bad things is that this sleeping disorder is affecting not only the elderly people but also the young generation. The number of young sleep apnea patients has risen in the past 10 years. Overweight children are most likely to get obstructive sleep apnea. But, skinny kids are not immune to this serious sleeping disorder. In some cases, weight has nothing to do with obstructive sleep apnea. Thin children don’t even complain from daytime tiredness, and still suffer from sleep apnea. Some doctors explain this as deficit hyperactivity disorder. There is no single reason why kids suffer from sleep apnea. 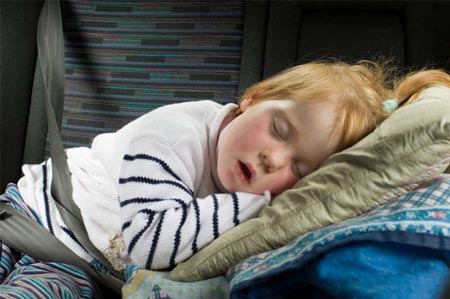 Doctors don’t exclude the option that some children might suffer from sleep apnea due to large tonsils and adenoids. This has been the main contributor for sleep apnea in several cases. And it makes sense. Tonsil tissues relax during the night, and block the air that flows into the lungs. Studies show that around 90 % of kids that suffer from sleep apnea are cured by taking their tonsils out. Once a tonsil surgery is done, kids stop snoring and breath normally during the night. Overweight children are a completely different story. Tonsils in overweight children are larger due to the fatty tissues in the upper airway. Removing them will not solve the problem.

One of the most popular and highly effective treatment that is used for kids that suffer from sleep apnea is the CPAP treatment. Doctors suggest that kids that breathe with difficulties during the night should use a CPAP machine. At first, children might not feel happy about the CPAP machine, but with time they will get used to it. Sleep apnea in children can be successfully eliminated by using appropriate CPAP machine. The results are visible after few days. Studies show that children who use a CPAP machine sleep better than those who don’t use the CPAP therapy. The good news is that, children can use a CPAP machine for three hours and still have positive effect. These machines are designed to deliver enough air to keep the airway open during the night. Some parents prefer tonsil surgery for their kids, where as others opt more for the efficient CPAP treatment.