Are you unsatisfied with your car’s overall performance but simply don’t have the budget for large upgrades? In that case, I’d like to let you in on a little secret. Whether it’s the sound that’s bugging you or the lack of power or fuel inefficiency – it can all be solved by making a simple and inexpensive change. By replacing your car’s stock exhaust system with an aftermarket one you can expect a number of benefits that will improve your car’s performance.

Let’s start with the most important benefit of purchasing a quality aftermarket car exhaust. Although it won’t make as big of a difference as a turbo or supercharger, the right aftermarket exhaust can increase your car’s horsepower. But still, depending on the type of car you have and the exhaust system you choose, you can expect to boost its power by up to 5%, which isn’t a small increase. While most original exhausts are single pipe and as such tend to create more back pressure, you can pick an aftermarket one that offers more room for the fumes to escape. This can be either a dual rear exit exhaust or a dual side exhaust. However, make sure that it matches your car precisely.

If you’re not happy with how your ride sounds, a new car exhaust can fix this problem. While resonators are not a usual part of a stock exhaust system, many aftermarket exhausts include one. The resonator helps reduce the noise the car makes by rejecting sound waves to cancel them out. It is usually tuned to a certain frequency which is deemed too loud or unpleasant. As a result, you can have a much quieter car. 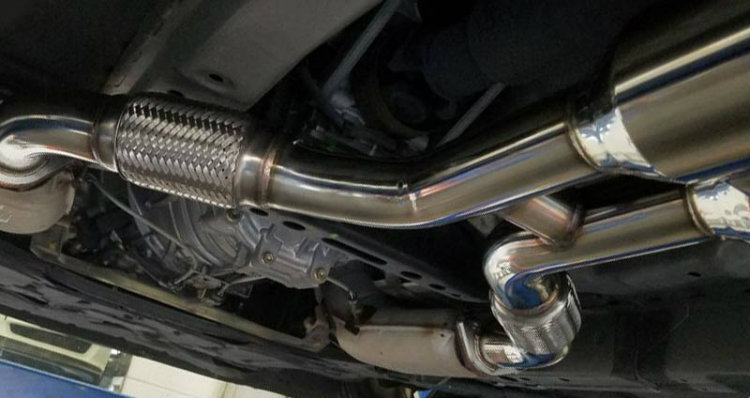 Although it may not be obvious, the exhaust system can affect how much fuel the engine consumes during operation. With the right aftermarket exhaust, the engine doesn’t need to work as hard when the gasses are expelled quickly and as a result, it won’t use up as much fuel. While the numbers may not be astronomical at first, with time, you will save up a lot of money on fuel. In addition, you will also do some good for the environment as your car won’t produce as much gasses.

And finally, not only will a good aftermarket exhaust boost your ride’s performance, but it can also improve its appearance. Because after being used for some time, the exhaust can get rusty or damaged and ruin your car’s clean looks. When choosing a new exhaust, it’s helpful to go for a material that will withstand the road debris and exposure to fumes for longer. Exhausts can be made from a variety of metals, however, it’s recommended to go with stainless steel. Stainless steel makes for some of the strongest exhausts and is also corrosion resistant, making it ideal for wet and humid conditions.